We love looking forward to things…summer vacation, fall colors, Christmas, and so on.  What better thing for a book lover to look forward to than a new book?!  Especially a book with a fabulous cover like Mysteries of Cove by J. Scott Savage.  This is a book that will be released in Fall 2015.  So here is some teaser information to get you excited…

Like many of my books, the inspiration for my new series Fires of Invention came from the collision of two ideas. The first time the story occurred to me was while I was watching the musical Wicked with my wife. The moment I walked into the theater and saw the huge mechanical dragon above the stage, I thought, Wow! I have to write a story about that! A few weeks later, I was talking with my nephew, who is probably the most creative kid I know, but whose inventiveness often gets him into trouble, and I thought, What if a kid who had the talents of my nephew lived in a world where creativity was against the law? What if the kids were building . . . a steam-powered dragon? Bam! I had my story.

Powered by great feedback from my agent, Michael Bourret, my good friend and author James Dashner, my publisher, Chris Schoebinger, and the song “Warriors” by Imagine Dragons, I wrote the entire first draft of the first volume in the series, Mysteries of Cove in four weeks. This book is unlike anything I have ever written. There are elements of City of Ember, Dragon Riders, and Hugo in it all mashed up together in a world I fell in love with from the moment I started writing.

I think what’s most exciting to me about this book is that it’s about giving yourself the freedom to imagine. To take chances. Too often we limit ourselves by only trying things we’re confident we can succeed at when what we need to do is give ourselves permission to fail. Often it is when we attempt things with no idea of how we can possibly pull them off that we achieve our greatest successes. 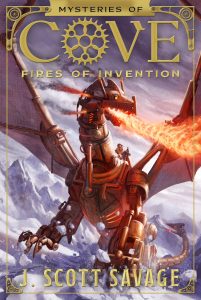 Trenton Colman is a creative thirteen-year-old boy with a knack for all things mechanical. But his talents are viewed with suspicion in Cove, a steam-powered city built inside a mountain. In Cove, creativity is a crime and “invention” is a curse word. Kallista Babbage is a repair technician and daughter of the notorious Leo Babbage, whose father died in an explosion-an event the leaders of Cove point to as an example of the danger of creativity.

Working together, Trenton and Kallista learn that Leo Babbage was developing a secret project before he perished. Following clues he left behind, they begin to assemble a strange machine that is unlikely anything they’ve ever seen before. They soon discover that what they are building may threaten every truth their city is founded on-and quite possibly their very lives. 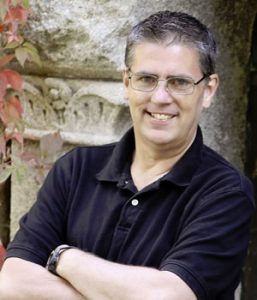 J. Scott Savage is the author of the Farworld middle grade fantasy series and the Case File 13 middle grade monster series. He has been writing and publishing books for over ten years. He has visited over 400 elementary schools, dozens of writers conferences, and taught many writing classes. He has four children and lives with his wife Jennifer and their Border Collie, Pepper, in a windy valley of the Rocky Mountains.

Where to Find Scott

PreviousAnni Moon and the Elemental Artifact: An Elemental Fantasy AdventureNextThe Carnival at Bray