The Hating Game: A Novel 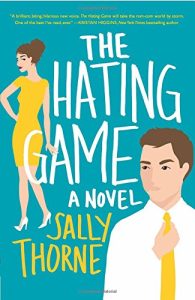 I am so not a romance novel fan.When I was a librarian, I would see women (and men!) picking up piles of them, and returning them and just cringe. Unfortunately, some books disguise themselves as fiction, when they are quite clearly romance once you get into them. Reader beware! If you are a romance-hater like me, then this book is not for you! It was a bit trashy at times, and at others it seemed like innocent, old chick-lit. But mix it all together, and you have a romance with a delightful cover. I should have done more research about this book before I began reading it, but silly me, I judged it by its cover as I normally do.

Lucy Hutton seemed to me to have it all: a great job, a cute name, a cute body. Everybody loved her (perhaps because of all of her “cuteness”?).  However, everyone has enemies, and of course, no one is perfect, so of course Lucy had an enemy. This is where things became ridiculous and annoying to me. The way she treated her rival seemed like Lucy was still in high school. Her “enemy” was a guy, and of course he was adorable. But instead of ignoring him or just putting up with him, Lucy agitates things and everything gets all romantic and complicated.

I know that this book is going to leave some readers swooning; unfortunately, I am not one of them. If you’re a fan of romance novels and want a toned down version of a Sylvia Day novel, then you’ll probably love this book. But if you’re looking for something more Shopaholic, then steer clear!

Review of an Advance Reader Copy

Violence/Gore:  A woman imagines strangling a man, and injuring him; verbal threats and disagreements are made.

Adults drink beer and champagne; drugs are mentioned; whiskey is drunk by an adult.

Tags: Featured
Lydia
Books and reading have always been an important part of my life. When I was very young, my grandma was the library director at our local public library. Years later, after she had retired, I became a librarian at the same library and worked there for several years before taking a part-time job at a local coffee shop, which gives me more time to do what I love, to read and to review books! A few of my favorite authors are Aimee Bender, Diane Chamberlain, and Curtis Sittenfeld however, I will read almost any book I come across! In my spare time you can find me reading (of course), volunteering at a wildlife animal rehab, or hanging out with my two house rabbits.

PreviousBeauty and the Clockwork BeastNextThe Girl Who Drank the Moon

Realms of the Dragons