Interview with Deborah Hopkinson, Author of A BANDIT’S TALE

Author Deborah Hopkinson is a queen of middle grade historical fiction.  Her latest work, A Bandit’s Tale:  The Muddled Misadventures of a Pickpocket, is set in New York City in the late 1800’s.  When we were given the opportunity to interview her, we jumped at the chance.

Compass Book Ratings:  April is Prevention to Cruelty to Animals Month.  Given the themes in A Bandit’s Tale, was the book’s April publication date by design or a happy coincidence?

It was both, actually. Once I began researching A Bandit’s Tale, we realized that April 2016 would be the 150th anniversary of the ASPCA. Since Henry Bergh makes an appearance in the story, my editor, Allison Wortche, and publisher, Knopf Books for Young Readers, made plans to release it in April.

Compass Book Ratings:  In A Bandit’s Tale, you address two major themes:  animal cruelty and child labor cruelty.  Either theme is worthy of its own book. Why did you choose to combine them in one novel, rather than creating separate novels for each theme?

The two movements were, in fact, closely related. I was somewhat familiar with Jacob Riis from my research for my 2003 nonfiction title, Shutting out the Sky, Life in the Tenements of New York. The startling photograph of the children near a dead horse appears in that book as well, and I have often shown it to students at author visits.  As I researched both Riis and Henry Bergh further, I realized how the spheres of the two reform movements intersected. I also knew, from my research on Charles Dickens, that he was a supporter of the first animal shelters in London called, “The Home for Lost and Starving Dogs.”  In the end, I decided to combine them.

Compass Book Ratings:  Did you have a particular scene in A Bandit’s Tale that was your favorite to write?

Yes, I do! When I was young, I loved reading about disasters, ferocious storms, and mountaineering expeditions.  I’d written a nonfiction article about the Blizzard of 1888 some years ago, and so I couldn’t resist having Rocco plan his escape attempt during that surprise storm. And, of course, Mary Hallanan would have to be out in the storm too, trying to rescue horses! 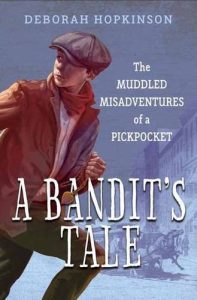 Compass Book Ratings:  Was there a scene or character that you wanted to include in A Bandit’s Tale, but that you had to cut? And, why did you feel it needed to be excluded?

As it happens, I did more adding then cutting. I love writing for boys and reluctant readers, and can sometimes get caught up in the action and forget taking the time to let readers get to know the characters better. So we added several scenes with Rocco and Mary.

Compass Book Ratings:  Every writing project has its unique challenges.  What was the greatest challenge you had in writing A Bandit’s Tale?

A Bandit’s Tale is a picaresque novel, and I wanted a light tone, even though the subject matter of children made to work as street musicians is quite grim.  I think the greatest challenge was to keep that balance between Rocco’s misadventures, and the reality that underscored the lives of real children placed in that situation.

Compass Book Ratings:  What is your current writing project?

Speaking of challenges, my current writing project is a historical fiction chapter book about the abolition of the slave trade, which takes place in the 1780s. I also recently finished a story that will appeal in a forthcoming volume of Guys Reed.  My story, entitled “Becoming Stink Daley,” takes place in 1858 New York City and is about the swill milk scandal, in which doctored and poisoned milk from cows fed with the swill waste from distilleries was sold.  Often we think these problems are behind us, but then realize we are still facing public health issues such as the water crisis in Flint, Michigan.

Compass Book Ratings:  What is the one interview question that you are completely ready for and no one ever asks you? Here is your big chance…

Well, students sometimes ask me this at author visits, but adults usually don’t: Why don’t I write a fantasy?  The truth is, I think the past is far more interesting than any fantasy world I could concoct. I love writing about history and sharing it with young readers. And some of my favorite moments in schools are when students tell me that reading my books makes them want to read more about history.

Professor Sam Wineburg, who runs the Stanford History Education Group, once said, and I am probably not quoting exactly here, that “Studying history, we think our way into what that world was like. It’s the only form of time travel that exists.”

Thanks again to Deborah Hopkinson for appearing.  For other stops on the Bandit Blog Tour please check deborahhopkinson.com.   #BanditBlogTour

Tags: Featured
Cindy M
An accountant and CPA by profession, I found myself a book reviewer for Squeaky Clean Reads by happenstance. When the opportunity came to transform that website into Compass Book Ratings, I was excited to seize it and meld my business background with my love of books. As the mother of three teenage sons, I have read a large number of children and young adult books and I believe that there is great value in a content review service. As much as we would love to read everything our children read, there just isn’t enough time. I also appreciate being able to select books for myself that are really worth my precious and limited reading time. I believe there is a book out there for everyone–they just have to find it!