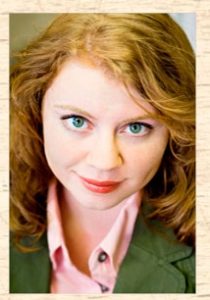 The Penguin Teen On Tour authors came to California this week. Jessica Khoury, author of Kalahari, was gracious enough to give Compass Book Ratings a few minutes of her time for a quick author interview in a room that felt a little bit like a glorified closet, but she was a sport. 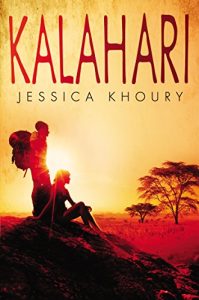 Click on Book Cover to go to Book Review

CBR: What was the source of inspiration for Kalahari?
Jessica:  I knew I wanted to write another Corpus book which meant it had to be about a science experiment, probably something gone wrong, and something that teenagers would have to overcome. So the first thing I had to decide was where it would be set. My first book, Origins, was set in the Amazon Rain Forest. Vitro, my second book, is set on an island in the South Pacific. I knew I wanted another remote, interesting location. I was sitting at my desk brainstorming where I could put this book that was far from civilization and I looked over at my shelf and saw this DVD, The Gods Must Be Crazy, which is this old comedy and it is set in the Kalahari Desert. So I was like, “Huh” and I googled it and I was hooked. I knew very little about the Kalahari because there are very few stories set there. So I got as many books as I could, but I still wasn’t satisfied so I booked tickets and spent a couple of weeks in South Africa in Botswana doing researching, asking questions, going out every day and driving through the bush and mapping out where the book would take place. It was hugely inspirational. When I got home I started writing and it was one of the easiest drafting processes I have ever had. After being there it just really fueled my imagination.

CBR: Besides the setting, there is the science side of it. So what did you do when it came to researching the science side of your books?
Jessica: I wanted to write a monster book, about something that escapes alive, and tries to hunt down the main characters. I remembered an article I read in a science magazine about an experiment run by Dr. Lee Cronin, who was a biochemist at the University of Edinburgh. He actually is still running this experiments in which he is trying to manufacture inorganic life—life that is non-carbon based. That really captured my imagination and decided to take it a step further…What is the worst that can happen here? Of course you can’t have a story about science without something going wrong.

CBR: Do you have a particular scene in Kalahari that was your favorite to write?
Jessica: There are a lot of scenes. So much of what is in the book was inspired by what I saw and did there. Perhaps one of the most fun scenes to write is when a lone male elephant bursts out of the bush and tries to gore one of them. That was based on one of the elephants we saw out in the bush. The guide told us his name was Jason and he was “very, very naughty”. He was constantly harassing the tourists, trying to push over the vans. When we saw him he was running circles around us and trumpeting and flapping his ears. That elephant inspired that scene and it was a lot of fun to write.

CBR: You write for the YA market, which is generally ages 12-18. You mentioned that Redwall was one of your favorite series, which happens to be one of my son’s favorite series. What else were you reading when you were the age of your readers?
Jessica: As a teen I really loved science fiction and fantasy. Lloyd Alexander is one of my favorite authors and his books inspired me to write my first novel when I was thirteen. I also really enjoyed the Harry Potter books and they were hugely influential…I also read a lot of adult sci-fi and fantasy. One of those was Lois McMaster Bujold. She is a brilliant, brilliant woman. Her books were one of the things that made me want to go into science fiction.

CBR: What is your current project?
Jessica: I am writing a novel that is a re-telling of Aladdin, told from the point of view of the genie—who just happens to be a girl. The book is titled The Forbidden Wish and it will come out in the spring of 2016.

CBR: What is the one interview question that you are completely ready for and noone ever asks you? Here is your big chance…
Jessica: That is such a good question. People do ask this a lot–about when I first found out my book was going to be published. It is one of my favorite stories because when my agent called to tell me that Penguin had made an offer for Origin I was in the middle of an eye exam. My eyes were dilated, I start crying, I start laughing, I start hyperventilating, I start crying again…a year later I came back for my next eye exam and the optometrist said, “Remember last year when you were here and you got a call? Well, I took a picture of you and you might want it.”He pulls out his phone and shows me the worst picture taken of me ever. It was pretty funny.

PreviousBecoming Ben Franklin: How a Candle-Maker’s Son Helped Light the Flame of LibertyNextInterview: Maggie Hall, Author of The Conspiracy of Us